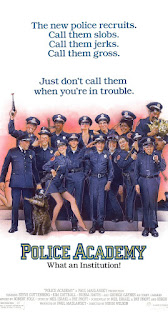 Due to a shortage of police officers, the mayor decides that police academies have to take on any willing recruit - no matter how unsuitable they might be. Carey Mahoney doesn't have much of a choice - go to jail or join the academy. With a rag-tag band of recruits, schooled under the watchful eye of the vindictive Lt.Harris, Mahoney might just have what it takes to become one of the future finest - providing he survives the training!